The Environmental Impact of Meat (here)

The Vital Role of Insects (here)

The Environmental Impact of Meat

Have you ever eaten a ‘Beyond Meat’ burger? Is it better for the environment than the meat it replaces?

Livestock production for meat consumption is a huge topic, and the best choice for the environment depends a lot on the context: where the livestock was raised, how it was raised, and what it was fed.

Livestock that is naturally grass-fed and raised in free-range conditions appropriate for the land use (like grazing lands in Alberta that previously sustained bison) provides meat with a low environmental impact. [1]  Unfortunately, we know that most animals for meat production are not raised under these conditions. We also know that as the standard of living for much of the world’s population rises, so does the consumption of meat.

Much of our meat is raised on soybeans, corn, and barley as feed. The global increase in meat consumption has been accompanied by large increases in grain and soybean production for intensive livestock operations. One-third of the world’s arable land grows industrial-scale crop monocultures dedicated to feed animals raised intensively for meat consumption. The conversion of rainforests and natural grasslands and the application of fertilizer and pesticides for animal feed is not environmentally friendly – it releases massive quantities of sequestered carbon to the atmosphere and it is wasteful of land, energy, water and clean air. [2] [3]

Meat consumption is mainly driven by culture, tradition and taste. The intermediate step of feeding plant crops to animals intended for human consumption is unnecessary and wasteful. Crops grown for meat production should instead be used to feed humans directly.

On August 8, 2019, over a hundred leading researchers released a summary report on climate change and land through the Intergovernmental Panel on Climate Change (IPCC). The report describes plant-based diets as a major opportunity for mitigating and adapting to climate change, and includes policy recommendations to reduce meat consumption. The report states with high confidence that balanced diets featuring plant-based and sustainably produced sources of meat “present major opportunities for adaptation and mitigation while generating significant co-benefits in terms of human health.”

In the last decade, plant-based foods have been developed to create alternatives for those accustomed to the taste of meat. A ‘Beyond Meat’ burger has 18 ingredients, including: pea protein isolate, canola and coconut oil, rice protein, cocoa butter, mung bean protein, pomegranate fruit powder, and beet juice extract (to give the burger its meat-like ‘blood’).

Is this an environmentally friendly substitute for meat? Can we make better choices with our meat consumption?

2.  Chart Shows What the World’s Land Is Used For
Natasha Brooks, One Green Planet
Accessed 31 July 2020

Other Sources of Interest.

In thoughtful times, what Canadian doesn’t turn to Leonard Cohen?  Consider one of his most famous songs. Suzanne, the lyrics go, takes you down to her place by the river and ‘feeds you tea and oranges that come all the way from China’.

Oolala, Leonard - all the way from China?  But this was written in 1966  when China might reasonably be seen as far away, both in imagination and geography.  Now goods cross international borders, span what we once thought of as vast oceans, fly the (pre-pandemic) crowded skies and arrive in our stores at a fraction of the price of mandarin oranges in Cohen’s era.

But at what cost?  What does it cost us to curtail production here and take advantage of cheaper labour costs in other lands, to fly fresh produce around the world, to truck pigs, cattle and poultry across borders as though they were no more sentient than crates of oranges?

If the world seems close and perhaps claustrophobic to us now, we are left to imagine how the walls of civilization are closing in on the biosphere of other life forms with whom we share this blue and green planet.  Other species who once had the luxury of space separate from human inquiry & exploitation.

Charismatic fauna like tigers, elephants and mountain goats have long felt the impact of human encroachment both territorially and as objects of cultural significance.  Animals that are hunted not for meat but for what it means to have their hides or heads adorning our spaces.  Others, like the pangolin are less famously centred in our awareness but are of increasing importance as the most heavily trafficked wild mammal across the world today.

Famously studied by Mary Douglas working with the Lele of Central Africa (circa 1964) pangolins are described as a scaly anteater with the body and tail of a fish yet with four legs used to climb in trees.[1]  Pangolins (Manis tricuspis) do not fear people and reproduce like us, usually having only one live child at a time. These anomalies suggested to the Lele a special link between humans and animals – a creature that could spiritually mediate between the two.  Killing a pangolin, they said, brings animals to hunters and babies to women - both of which were highly desired.

For all the curiosity of pangolins, neither their threatened status nor their presumed medicinal qualities are unique - many animals perform a similar role as anomalous creatures believed to bridge the worlds of spiritual and secular. Many believe we can incorporate the special qualities of an animal in a number of ways but most usually by hunting and eating.  All the science in the world can prove otherwise, that pangolin meat has no liver enhancing qualities, for example – yet humans persist in making the animal a way to think about or gain favour for ourselves within the cosmosphere.

Origins of the current pandemic are not settled, but certainly viral diseases have long leaped from animals to human.  Spanish flu was an HIN1 virus from presumed avian source, AIDS resided in primates and seems to have jumped to humans via consuming monkeys or apes. Our modest pangolin may have been an intermediate host for bat to human transmission of Coronavirus. In fact 60% of infectious diseases that affect us are zoonotic, having originated in animals. More than two-thirds of those originate in wildlife.[2]

Many of us are anxious to get back to normal after the lockdown lifts but what version of  ‘normal’?  Can we develop a more harmonious relationship with the natural world?  Admire animals not for the way they help us think about us – but for what they intrinsically are?  Can we set aside tracts of land for them, lands like Yellowstone to Yukon (Y2Y) where we tread lightly, sacrificing some of our freedom for their very survivability?  Can we begin to think of our relationships on earth not only in terms of sustainability but  'abundability' as Nuu-chah-nulth knowledge carrier Joe Martin relates. [3]

Cohen has passed on to whatever lies beyond, but his songs remain for us to ponder and enjoy.  Like animals in traditional Lele cosmology, his music is good to think with.  Like animals worldwide, life is not only analogies and poetry, but the reality of a warm beating heart – good to think and good to respect.

3.  Gilpin, Emillee
COVID-19 not the first pandemic Indigenous Peoples have quarantined from
2 April 2020

COVID-19, Brought to You by Globalization.

'Tip of the iceberg': is our destruction of nature responsible for Covid-19?

The Vital Role of Insects

I have a weakness for the little things of this planet. Insects, in all their variety, ability, and beauty. I especially love spiders. In fact, last summer my family adopted a gorgeous Cat Face Spider who had spread her web across my son’s window. We caught lunch for her - it was fabulous to watch her zip down from her hidey-hole to wrap up her prey in thick white silk. Her wrapping web was nearly invisible, like thin wool. Spiders produce seven types of silk for different jobs. 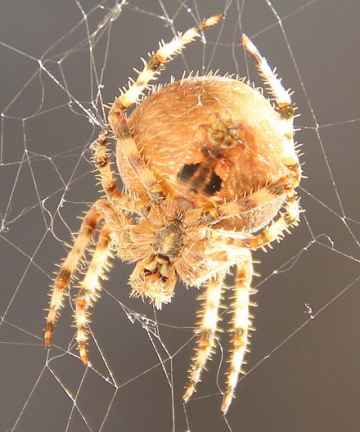 To me, that’s fascinating and miraculous.

Now we do. As Damian Carrington wrote in The Guardian:

The world’s insects are hurtling down the path to extinction, threatening a “catastrophic collapse of nature’s ecosystems”, according to the first global scientific review.

More than 40% of insect species are declining and a third are endangered, the analysis found. The rate of extinction is eight times faster than that of mammals, birds and reptiles. The total mass of insects is falling by a precipitous 2.5% a year, according to the best data available, suggesting they could vanish within a century.

Oh! But maybe the insects in Canada are okay …

No. They’re not. But we knew that, didn’t we? All you have to do is remember the plethora of insects plastered across your windshield after a long summer trip. That doesn’t happen anymore. The insects are just not there.

... the country has lost a significant amount of its insect biodiversity in recent years based on the results of annual collection samples.
That means a lot of the insects at the bottom of our food chain are dying out, which could have an unexpected, but noticeable impact on the lives of humans.

In our region, 720 species of insects are at risk, and there’s an estimated 30,000 prairie species that haven’t even been studied yet. In other words, insect species could disappear before we even got a chance to find out they existed! [i]

Insects are critical to the health of people. They pollinate our food, anchor entire food chains, break down plants and other organic matter, and control pest species that can decimate crops. Insects are such an important part of our planet’s ecosystems that biologist E.O. Wilson once called them 'The little things that run the world.'

Why are insects threatened? There are multiple factors, including pesticide and herbicide use, habitat loss, intensive agriculture, light pollution (turning insects into easy prey at night), and climate change. Skevington says climate change is "one of the most impactful reason bugs are dying out." He cited recent temperature fluctuations in spring that some bugs simply can’t endure.  "Quite often you’ll have really big warm spells so you get a flush of insects coming out, followed by a cold snap" he said. Cold snaps can interrupt a bug’s lifecycle and severely impact their populations, and heat waves affect insect reproduction by severely decreasing male fertility. [ii]

What can we do to help insects bounce back? A lot! We can: stop using chemicals on our lawn and garden, get rid of the bug zapper (which kills good insects, not mosquitoes), and buy organic food and cotton products that use fewer pesticides in production. In your garden, plant native species and leave little homes insects can shelter in, especially over the winter. [iii]

We’ll all be better off if insects can thrive again.
You don’t have to feed a spider, but you can give one a hidey-hole in your yard!